Behind the Badge Who we are: Officer Sanchez

Ofc. Jesse Sanchez was born and raised in Sacramento California by his parents and along with his four other siblings. He attended high school in Sacramento where he wrestled and played football.

Ofc. Sanchez’ grandfather was the reason he wanted to be in law enforcement, and he always loved hearing his grandfather’s stories from when he was a Deputy in Mendocino County. Ofc. Sanchez also has an older brother who works as a Police Officer for the Lincoln (CA) Police Department.

Ofc. Sanchez always worked in some type of law enforcement job. One of his first jobs was working for the Los Rios Police Department as a Campus Security officer which made him want to be in law enforcement more.

In his free time, he enjoys training and competing in Jiu-Jitsu and helping teach youth Jiu-Jitsu classes as well hiking, fishing, and spending time with family and friends.

Ofc. Sanchez is excited to be a part of the Winters Police Department and be able to serve the citizens in the City of Winters each day. 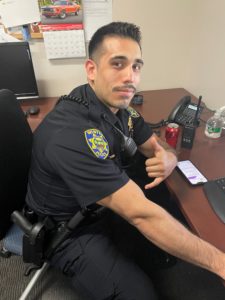