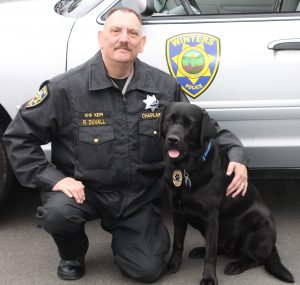 One of Kepi's functions is to provide support to first responders after a trauma or crisis event. Post-Traumatic Stress Disorder (PTSD) is something that every First Responder faces during their career. The team will be an immediate resource to Law Enforcement, Fire, and EMS personnel. Robert and Kepi are also available to the residents of Winters during times of trauma, such as the death of a loved one.

K-9 Kepi will be featured during special events in the City and the Crisis Intervention Team is available to all first responder agencies in Yolo and Solano Counties. Robert and Kepi are volunteers and provide this service at no cost to the agencies. Both Robert and Kepi are approachable and would love to meet everyone in the City. Be sure to stop and say hello when you see them out and about the community.

The Crisis Intervention Team is available 24/7  to all first responder agencies in Yolo and Solano Counties. In Yolo County they are currently based in the City of Winters and assigned as Chaplains to the Winters Police Department and Winters Fire Department.

Chaplain Duvall and K-9 Kepi are volunteers and provide service to any agency at no cost. Donations are also accepted and may be sent to the Winters Police Department Attn: Canine Kepi Fund 702 Main Street Winters, CA 95694.

If donating by check, please make the check out to the Winters Police Department with K9 Kepi in the memo line, City Tax ID #946000457.

How you can be involved

Because Chaplain Duvall and K-9 Kepi are volunteers, they do not have a budget to cover costs of dog food, grooming, or vehicle costs (such as maintenance, registration, or fuel). Donations ensure the financial support needed to keep this program available to all.

If you would like to contribute to the team, please contact Chaplain Duvall by phone at (530) 795-2261 ext 146 or by email at robert.duvall@winterspolice.org.

The Crisis Intervention Team is a volunteer resource to Fire, Law Enforcement, and EMS personnel who face difficult calls on a daily basis. Team members Chaplain Robert Duvall and K-9 Kepi are available to the first responders and residents of Yolo and Solano Counties during times of trauma, such as the death of a loved one. K-9 partner Kepi is the first dog in this type of crisis intervention assignment.    K-9 Kepi is a certified facility dog in addition to being a crisis intervention dog and holds the title of Chaplain. One of K-9 Kepi's functions is to provide support to first responders after a trauma or crisis event call.

Chaplain Robert Duvall serves as the handler for the Chaplain/ Crisis Intervention Team for the Winters Public Safety Crisis Intervention Team. He began his career in the 1980s as a Paramedic for the City of Richmond, CA. He retired in 2012 from the Contra Costa County Sheriff Office. In over 20 years in Public Safety, he saw first-hand the struggle of first responders to maintain their emotional, mental, and overall wellbeing. He decided that there needed to be a resource available to first responders, applied for, and received a specially trained canine.

K-9 Kepi was specifically paired with Chaplain Duvall due to her ability to sense emotional stress, a talent that was heightened during her three week training course. She has been trained to provide both active (moving to be touched) and passive (sitting still) emotional support. The team is often dispatched to assist with calls that have a traumatic component. Examples of calls include death notifications, serious traffic collisions, assaults, homicides, and crimes involving children.

“As a Chaplain, I can take care of the Spiritual wellbeing and as a Crisis Intervention Specialist I can cover just about everything else.”- Chaplain Duvall

K-9 Kepi started the Crisis Intervention Program as a two year old. She was provided to Chaplain/K-9 Handler Robert Duvall from Canine Companions for Independence in Santa Rosa. Robert and Kepi graduated on November 6th, 2015 as a State Certified Facility Dog and Crisis Intervention Team. They have also received a Fire Chaplain Certification. Kepi is a mix of Golden Retriever and Labrador Retriever. Both canine breeds have an easy going temperament and are highly trainable. Kepi exemplifies these traits in addition to a fun loving personality.

K-9 Kepi exhibited her talent of detecting stress pheromones early on. Once she completed her training, her skills were put to use as she passively and actively interacted with first responders and community members. At any indication of stress, she alerts her handler who can then begin the process of intervention. Kepi’s passive alert often consists of her seeking out an individual and sitting next to them, soliciting interaction through voice or being petted. Her active alert can consist of her directly engaging the individual by shoving her head in their hands or standing on their laps, thereby requiring they interact with her.

Our mission is to support our first responders, their families, and communities during times of difficulty.

Chaplain Robert Duvall and K-9 Kepi are also available to the residents of Yolo and Solano Counties during times of trauma, such as the death of a loved one.