Winters, Calif. – The Winters Police Department will roll out a police traffic services program to deter dangerous and illegal driving behaviors that increase the risk of crashes in the community. “Impairment, speeding and other dangerous driving behaviors jeopardize the safety of other people on the road,” Winters Police Department Chief John Miller said. “This funding allows us to provide necessary traffic enforcement measures with the goal of reducing serious injury and fatal crashes on our roads,”

We would like to thank the California Office of Traffic safety for awarding the Winters Police Department the Selective Traffic Enforcement Program (STEP) Grant, which will allow the Winters Police Department to update some of our aging equipment to help detect impaired driving, such as Preliminary Alcohol Screening (PAS) devices as well as fund additional officers on overtime to conduct selective enforcement programs including:

Chief Miller concluded, “We are confident these additional efforts will make Winters a safer community for motorists, bicyclist, and pedestrians alike.”

The grant program from the California Office of Traffic Safety, through the National Highway Traffic Safety Administration will run through September 2022. 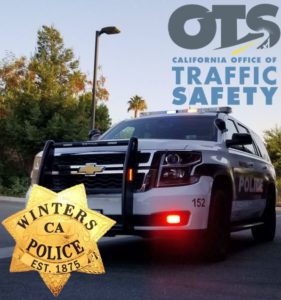