Behind the Badge, Who We Are: Sergeant Cardoza

Sergeant Manuel Cardoza started his law enforcement career with the City of Placerville as a patrol officer.  He became a training officer and was a K-9 handler for a number of years.

Sergeant Cardoza changed departments in 2003 to the West Sacramento Police Department, where he worked patrol and was a motor officer for several years.  He was also the departments accident reconstructionist during that time as well, investigating all major injury accidents.

Sergeant Cardoza became a patrol supervisor for the Marysville Police department, where he worked from 2017 to 2022.  Wanting to come back to Yolo County, Sergeant Cardoza saw a great opportunity when a Sergeant position became available for the City of Winters and applied.

Sergeant Cardoza holds a Master’s Degree in Police Administration and is an adjunct professor at Yuba College. Sergeant Cardoza is married and has a 13 year old son. He and his wife of 15 years own a business in Sacramento that they enjoy running together.  In his off-duty time, he enjoys spending time with his family, traveling, golf, and camping. 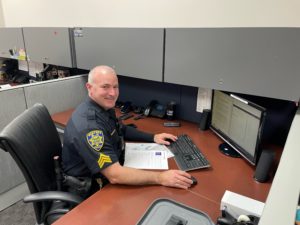