Behind The Badge, Who We Are: Community Services Officer Shelly Duenas

CSO Duenas moved to Winters in 2019, after being born and raised in Sacramento. She attended California State University of Sacramento and obtained her bachelor's degree in 2012, becoming the first person in her family to attend college.

Before working as a CSO, Duenas had various jobs including Assistant Sales Operations at Verizon Wireless, Teaching at Knowledge University, and Motor Vehicle Representative at the Department of Motor Vehicles. She married in 2010 and, as her family grew, she stayed home for a few years to care for her three children.

CSO Duenas enjoys spending time with my family and taking her children on adventures like bike riding, hiking, riding quads and camping. 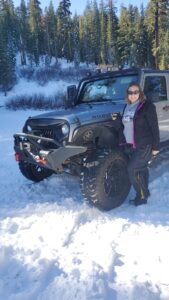